The Ember of Hoole, also known as The Glauxian Ember, is a mysterious ember said to be imbued with powerful magen. It has been the subject of past and contemporary contention in the owl kingdoms because of this fact. It was retrieved by Hoole, the first ruler of the Great Ga'Hoole Tree.

It resided in the volcano Dunmore of the Sacred Ring.

When Grank, the first collier, first ventures into Beyond the Beyond, he meets the great dire wolf Fengo and sees a glimmering ember in the wolf's eyes that would eventually come to be known as the Ember of Hoole. Fengo explains that the Ember was the owl ember, not the wolf ember as Grank interpreted it to be. Fengo's reasoning was that in the language of wolves "Hoole" meant owl, and it was the spirit of an owl that had lead himself and the rest of his kind into the Beyond.

After their first meeting, Grank remains in the Beyond with Fengo to learn the secrets of fire and flame, but Grank's thoughts continually turned to the Ember. Fengo warns Grank that the time for Ember of Hoole to be his was not now. Grank continued his studies and traveled between the Beyond and the Northern Kingdoms. On one such occasion, Grank flew back to the Beyond and noticed that one of the volcanoes of the Sacred Ring had appeared to turn to glass, and the Ember of Hoole could be seen within. Grank immediately flew into the crater and retrieved the Ember, much to Fengo's dismay after the fact. Eventually, a disturbing change came over Grank that left him in a stupor. During this time, Grank witnessed within the flames a vision of the treachery of Lord Arrin and the invasion of the H'rathghar Glacier by hagsfiends.

Eventually, King H'rath's messenger, Joss, arrives in the Beyond with a message for Grank prompting him to return to the Northern Kingdoms. Fengo then convinces Grank to put the Ember of Hoole back into the volcano. Fengo explains that the powers of the Ember had been too strong for him to handle and that it was meant for another owl who could use it for good and not be affected. Grank finally fell out of his stupor, returned the Ember, and set off for the Northern Kingdoms to aid his friend and king.

During his time in the Northern Kingdoms, Grank acquires heir of the late King H'rath and Queen Siv and raises him as his own, naming him Hoole. Grank perceives that this young owl is special, which proves true as Hoole has the ability to read flames, albeit much better than Grank could. Grank also believes Hoole to be the one who could wield the Ember and not succumb to its great power. However, peace did not last long, because the hagsfiend Ygryk and her mate Pleek find Grank's refuge, and are determined to claim Hoole as their own chick and use his powers. Fortunately, Grank, his apprentice Theo, Siv (disguised as a gadfeather) and the Snow Rose (a real gadfeather) are able to fend off Ygryk and Pleek. Grank immediately decides that Hoole, his friend Phineas, Theo and himself should return to the Beyond.

Meanwhile, Fengo clears a dispute with Dunleavy MacHeath regarding the name of the Ember, claiming that to call it the wolf ember was only a sign of greed, and to be obtained by the hagsfiends would mean terrible things for all creatures, both owls and beasts. It was also during this time that a young dire wolf named Duncan MacDuncan brought about the idea of the Sacred Watch to protect the Ember if an owl of ill will were to attempt to retrieve it, which Fengo agreed to.

The company of owls finally arrive at the Beyond, and Hoole begins to learn about colliering and the ways of wolves in what would be preparation for him to become king, as well as retrieving the Ember. However, Dunleavy MacHeath betrays Fengo and spies on the group, later fleeing to the Northern Kingdoms to inform Lord Arrin of Hoole's location. As a result, Lord Arrin's forces gather themselves and fly to the Beyond. Despite that, Queen Siv had managed to rally her own army to defend Hoole. While the two forces clash in the Beyond, Hoole sees the volcano, Dunmore, appear to turn to glass, just as Grank had seen when he originally retrieved the Ember. The Ember of Hoole had presented itself once again to an owl, however this time, that owl could withstand the Ember's power and use it as a force for good in a world filled with nachtmagen.

The Ember of Hoole appears almost the same way as it did during the time of Hoole: one of the volcanoes seems to turn to glass, allowing Coryn to spot it, swoop down, and retrieve it. He then became the new king of the Ga'Hoole Tree. Unfortunately, when the Ember is retrieved, it causes the current monarchs to perish, and Boron and Barran pass away.

Similar to how Hoole's parliament were superstitious of the Ember's powers, the some of the members of the current parliament were transfixed. A group of owls, led by Elyan and Gemma, formed the Guardians of the Guardians of the Ember (GGE) to provide refuge for the Ember. While Coryn and the Band were absent, the GGE began creating ritual and ceremonies for it. This included new guilds, artistic wares from Trader Mags, and even a prison for those who question the rituals, which Otulissa was locked away in.

During a battle at the Beyond, Coryn borrows some of the Ember's powers, making his eyes green and immune to the jaunx (similar to the fyngrot) of the vyrrwolves. Back at the Great Tree, this causes the Ember of Hoole to slightly lose its glow. The owls who notice this begin to panic, and blame Primrose for the cause.

When Coryn and his company return, they were outraged of the GGE's doings and tore down the ritual decorations. When the GGE is gathered, Coryn scolds them for such actions and reminds everyone that the Ember is not a thing to be worshipped, as it's not alive. The GGE was then disbanded and sent to the Glauxian Brothers' Retreat. In order to prevent this from happening again, Coryn hid the Ember among the bonk coals in Bubo's forge.

While Coryn was under the influence of the Striga, the blue owl learned of the Ember and convinced Coryn to bring it back from the forge. The Guardians were aware, so Bubo created a false Ember of Hoole and gave it to Coryn, who was unable to recognize the difference. The real Ember of Hoole was taken to the Palace of Mists by Pellimore.

Bess's palace is no longer safe in keeping the Ember, as an owl tried to find it. So a plan is devised by Coryn to remove the Ember and move it to a more protected location. Their plan is to gather a group of owls to carry botkins of bonk coals, with the Ember hidden in one of the bags. The owls aren't to know which one carries it, and they must all take different routes, eventually meeting up in the same location. Coryn planned to take the Ember to the Middle Kingdom, but the H'ryth there denied the request. So the king made the decision to return it to the Sacred Ring of Volcanoes. In his attempt to return it, Coryn is murdered by the Striga, but the Ember of Hoole successfully makes it into the volcano.

Faolan and Edme are sent to the Watch of the Sacred Ring to guard the Ember.

The Ember and the Beyond is destroyed in the earthquake, and the watch wolves, gnaw wolves and malcadhs were mended, even if they were dead. Edme did not get her other eye as she was malcadh made, not born.

The Ember is similar in appearance to a bonk coal, having a lick of blue in the center surrounded by the orange-red fire. What differentiates it is the green ring around the edge of the blue. The green color is considered significant, as the dire wolves are said to have green eyes that resemble the glow of the Ember. In the Middle Kingdoms, a hint of green in an owl's eyes is supposed to symbolize intelligence and wisdom.

Young Coryn (Nyroc) witnessing a vision of the Ember of Hoole, the colors of the Ember surrounding him on the Japanese cover of The Hatchling

Coryn retrieving the Ember on the Japanese cover of The Outcast 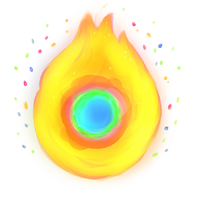