Guardians of Ga’Hoole Wiki
Register
Don't have an account?
Sign In
Advertisement
in: Stubs, Culture, Locations,
and 3 more

Hoole's words suddenly came back to Grank. He swiveled his head toward the young king. "You said the tree had Ga', lad. We should call it Ga'Hoole. Ga'Hoole," he shouted to the clouds and the rising sun.

—Grank, The Coming of Hoole

The Great Ga'Hoole Tree, often simply called the Great Tree, is the famous landmark of the kingdom of Ga'Hoole where the Guardians of Ga'Hoole reside. It grows on the Island of Hoole. The tree itself is over a thousand years old, since it sprouted in the time of The Legends of Ga'Hoole.

While on their way to Beyond the Beyond, Hoole, Grank, Theo and Phineas stopped on an island in the middle of a vast sea in the Southern Kingdoms (also known as the S'yrthghar). Upon landing on the island, the owls noticed that it was barren and lifeless. Hoole, being grieved because of his lost mother, let loose a few tears on the soil. This caused a seedling tree to push up out of the ground at an incredibly fast rate. Despite Grank's protests, Hoole claimed that the seedling tree had Ga' (great spirit). The owls then left the island but unknown to them, the seedling tree continued to grow and became as luminous as the egg Hoole had hatched out of. When Hoole, barely a king after the battle in the Beyond, decided to establish his court on the island. As the king and his company of owls flew across the Sea of Hoolemere, they discovered that the tiny seedling tree had become enormous in size. The place was known from that point on as Ga'Hoole and the tree the Great Ga'Hoole Tree.

"The Great Ga'Hoole Tree is a most unusual tree. Beyond it's immense size and extraordinary longevity, it's natural history is full of fascinating facts and phenomena."

—Otulissa, A Guide Book to the Great Tree 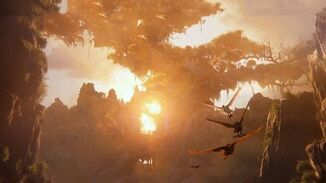 The Great Tree is an enormous tree that has lived for over a thousand years. It has many hollows for the Guardians to rest in, or for other reasons, like the library and the parliament. For some reason, when King Coryn brought the Ember of Hoole to the Great Tree for the first time, the Tree stayed a gold color, even during winter when it should have been white.

"You know, the berries taste like what some creatures call milk," Grank added. "Some owls call them milkberries now," Grank said.

—Grank, To Be a King