Great Horned Owls range in length from 18–27 in. (46–69 cm) and have a wingspan of 40-60.5 in. (101–153 cm); Females are usually larger than males, an average adult being 22 in. (55 cm) tall with a 49 in. (124 cm) wingspan and weighing about 3.1 lbs. (1400 g). Adults have large ear tufts, a reddish, brown or gray face and a white patch on the throat. The iris is yellow, except the amber-eyed South American Great Horned Owl (B. v. nacurutu). Its "horns" are neither ears nor horns, simply tufts of feathers. The underparts are light with brown barring; the upper parts are mottled brown. The legs and feet are covered in feathers up to the talons. There are individual and regional variations in color; birds from the Subarctic are a washed-out, light-buff color, while those from Central America can be a dark chocolate brown.

Their call is a low-pitched but loud ho-ho-hoo hoo hoo; sometimes it is only four syllables rather than five. The female's call is higher and rises in pitch at the end of the call. Young owls make hissing or screeching sounds that are often confused with the calls of Barn Owls.

The breeding habitat of the Great Horned Owl extends from subarctic North America through much of Central America and South America south to Tierra del Fuego. They are absent from southern Guatemala, El Salvador, and Nicaragua to Panama in Central, and Amazonia and the southwest in South America, as well as from the West Indies and indeed most off-shore islands. Within their habitat, they can take up residence in trees that include deciduous, coniferous, and mixed forests, tropical rainforests, pampas, prairie, mountainous areas, deserts, subarctic tundra, rocky coasts, mangrove swamp forests, and some urban areas. It is less common in the more extreme areas (i.e., the heart of the deserts, extremely dense rainforests and in mountainous areas above tree line), generally absent from non-tidal wetland habitat, and missing from the high Arctic tundra. All mated Great Horned Owls are permanent residents of their territories, but unmated and younger birds move freely in search of company and a territory, and leave regions with little food in winter. Great Horned Owl eggs, nestlings, and fledglings may be preyed on by foxes, coyotes, or wild or feral cats. There are almost no predators of adults, but they may be killed in confrontations with eagles, Snowy Owls and, mostly, other Great Horned Owls. Far-ranging as it is, it is not considered a globally threatened species by the IUCN.

Owls have spectacular binocular vision allowing them to pinpoint prey and see in low light. The eyes of Great Horned Owls are nearly as large as those of humans and are immobile within their circular bone sockets. Instead of turning their eyes, they turn their heads. Therefore, their neck must be able to turn a full 270 degrees in order to see in other directions without moving its entire body. An owl's hearing is as good as – if not better than – its vision; they have better depth perception and better perception of sound elevation (up-down direction) than humans. This is due to owl ears not being placed in the same position on either side of their head: the right ear is typically set higher in the skull and at a slightly different angle. By tilting or turning its head until the sound is the same in each ear, an owl can pinpoint both the horizontal and vertical direction of a sound. Their hearing allows Great Horned Owls to be efficient predators. Because of their size and sheer strength, Great Horned Owls can take on birds and mammals many times bigger than they are. In fact Great Horned Owls will eat just about anything that moves, crawls, slithers, swims or flies. Though they won't eat large mammals, they will eat things like hares, rabbits, voles, squirrels, flying squirrels, mice, rats, shrews, lemmings, bats, armadillos, muskrats, martens, weasels, ferrets, stoats, porcupines, marmots, skunks, kinglets, herons, young swans, woodpeckers, grouse, crows, pigeons, gulls, quail, turkeys, passerines, waterfowl, hawks, other owls, chickens, young alligators, amphibians, fish, crustaceans, insects, spiders, centipedes, millipedes(potentially), earthworms, scorpions, cats, and even small or young dogs. They are not fussy eaters.

Great Horned Owls are some of the earliest-breeding birds in North America. They breed in late January or early February and are often heard calling to each other in the fall, starting in October. They choose a mate by December and are often heard duetting before this time. For owls found in more tropical climates, the dates of the breeding season are somewhat undefined. They often take over a nest used by some other large birds, sometimes adding feathers to line the nest but usually not much more. Old crow and raven, Red-tailed Hawk, or large squirrel nests are often favored in North America. However, they are far from dependent on the old nests of others and may use cavities in trees and snags, cliffs, deserted buildings, and artificial platforms.

There are usually 2 eggs per clutch, with a clutch ranging in size from 1 to 5 eggs (5 is very rare). The average egg width is 1.8 in. (46.5 mm), the average length is 2.2 in. (55.2 mm) and the average weight is 1.8 oz. (51 g). The incubation period ranges from 30 to 37 days, averaging 33 days. Brooding is almost continuous until the offspring are about 2 weeks old, after which it decreases. Young owls move onto nearby branches at 6 weeks and start to fly about a week later. The offspring have still been seen begging for food in late October (5 months after leaving the nest) and most do not separate from their parents until right before they start to reproduce for the next clutch (usually December). Birds may not breed for another year or two, and are often vagrants ("floaters") until they mate, establish their own territories, and settle down.

Skench was the Ablah General of St. Aggie's and personally took part in dealing out punishments, such as laughter therapy and moon scalding.

Gylfie told Soren about her pit guardian who insisted on being called Unk (short for Uncle). He would talk sweetly to her, save her bits of snake to eat, and allow her extra sleep.

Later, as Soren and Gylfie escape, Skench bursts into the Library in full war regalia. She's slammed into the wall by the magnetism of the flecks, but soon frees herself and kills Grimble.

At the Great Ga'Hoole Tree a pair of Great Horned Owls are carrying in other injured owls.

Bubo, blacksmith of the Tree, is noted to be very large, with black talons, flame-colored feathers, and lives in a cave. He tags along with the colliering chaw, and also explains to Soren what flecks are.

After dreaming of flecks and seeing his parent's scrooms warn him about Metal Beak, Soren goes to see Bubo. Bubo tells him about what little he knows of Metal Beak, all about rogue smiths, and the Rogue Smith of Silverveil.

During a Parliament meeting, Bubo was on the antispronk side for the book Fleckasia and Other Disorders of the Gizzard.

One of Ruby's hollowmates was a Great Horned Owl.

When the Chaw of Chaws was sent to infiltrate St. Aggie's, they are interrogated by Unk. When they say they come from the Northern Kingdoms, Skench is summoned immediately. She believes their story and sends them to be moon blinked.

Later, Otulissa is brought before Skench and Spoorn. Skench brags about they found out there were Pure Ones spies in their midst. Then she has Otulissa tell them all she can about flecks.

Soon, Twilight starts a fight between the Pure Ones spies and the St. Aggie's owls. In the confusion, Skench arrives, recognizing Soren. Spoorn quickly follows with three Great Horned Owl guards. Before they can attack, Gylfie recites one of the Ga'Hoolian legends, stunning Skench and her cronies.

In preparation of the siege on the Great Tree, Bubo made a new type of battle claws called NASTs (Nickle Alloy Super-Talons). Bubo also partook in the war cabinet, reporting that he had extra hot coals so they could fight with fire.

Some time after the siege, Bubo led the colliering chaw to a forest fire at Broken Talon Point, also inviting the rest of the Chaw of Chaws. He explains to Soren that there are different constellations in different parts of the world.

Bubo joins Ezylryb and the Chaw of Chaws in The Beaks to rescue Eglantine and Primrose from Nyra and her small army of Pure Ones.

Having been ousted from St. Aggie's, Skench, Spoorn, and few other owls sought refuge at the Great Tree.

Bubo attended a parliament meeting that was moved to his forge. He showed everyone a new technique from the Northern Kingdoms: cold coals. He also made a "true stone" to detect flecks and lightweight mu metal helmets.

Bubo led the Bonk Brigade, using the cold coals to destroy fleck deposits. Then, led by Skench, they headed for the St. Aggie's library to destroy all the flecks there.

As the battle began, Skench attacked the guards viciously. Soon she turned on the Guardians, so Soren struck her with a flaming branch, sending her falling into the fire below.

Bubo equips a flail, or fizgig, for the rest of the battle. Afterwards, he makes sure the body of his friend Bruce, a Snowy Owl, isn't eaten by vultures.

The Rise of a Legend 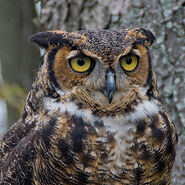 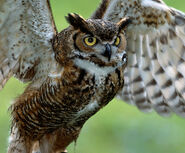 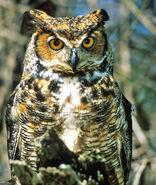