"Look Da! I'm gonna be the best flyer! That's because Tytos are best at everything, right Da?"

- Kludd near the beginning of the film

Kludd is an adolescent male Barn Owl. He is the son and eldest child of Noctus and Marella and the older brother of Soren and Eglantine. He, along with Soren, are kidnapped and brought to St. Aegolius. While Soren seeks to escape, Kludd trains to become a Pure One, basking in their praise.

Kludd bears a close resemblance to his mother, Marella; he has a distinctively darker chest and feathers, with dark amber eyes and less noticeable dark eye-rim feathers. Kludd has a small mohawk of feathers on his head, and throughout much of the movie has dark scars on his face after being attacked by a Tasmanian Devil. His beak is also slightly cracked, and near the end of the film his eyes shine red like the Pure One soldiers.

Kludd was first seen with his family in his hollow, ignoring Soren and Eglantine while they played War of the Ice Claws. He criticized Soren, saying that he had a soft head and that all he could think about were the legends that Da had told them.

﻿Later, Kludd and Soren start branching. Kludd is strong, but he has trouble mastering silent flight, which Soren executes perfectly. Soren challenges Kludd to a race to fly down to a branch, and even though Kludd gets a headstart, Soren gets there first. Kludd accuses Soren of cheating, but Marella splits up the argument. Kludd teases Soren about his leaf helmet as they go back into the hollow. He and Soren both complain when Mrs P. takes Eglantine to see their first pellets, as she has just had her first. Soren asks Kludd if he wants to try some more branching, and at first, Kludd doesn't want to, saying that he'll show off again, but he gets angry when Soren says that they could stay inside and play Battle of the Ice Claws again.

Soren tries to show Kludd how to try fly quieter, but he mentions the Guardians, and Kludd gets frustrated and gives Soren a shove, but in doing so accidently causes himself and Soren to fall out of the tree. On the ground, they are attacked by a Tasmainian Devil, and it pins Kludd down. Soren saves Kludd, but when he gets trapped himself Kludd is too scared to help. They are saved by Jatt and Jutt, but are then owlnapped by them. Kludd, trying to get free, bites Jatt's talon, and falls toward a lake. Jatt, annoyed, grabs him, saying to Jutt that he had a strong beak, and Jutt says that the Pure Ones will put that to good use.

He and the other owlets are finally dropped, and Soren tries to find him, but fails in the confusion, so he goes to Gylfie, telling her to stay with him. Nyra then appears, and Kludd is seen staring up at her in silence and some awe. Soren and Gylfie protest against Nyra's words, so she makes them pickers. Kludd hesitates, but refuses to go with Soren.

He and some other Tytos receive training from Nyra. Kludd proved to Nyra that he was far more skilled than any of the other owls, flying higher and catching the bluebird, beating another owl, who showed similar yet not as good skills. Nyra asks if Soren shows similar potential as a flier, but he lies to her that he doesn't. Nyra, amused, says that he musn't confuse praise for licence, and tells him to come with her to invite Soren to become a solider.

Nyra and Kludd find Grimble with Soren and Gylfie, and they find out that he had taught them to fly. Nyra tries to stop Soren and Gylfie from escaping, but Grimble, being stronger, manages to pin her down, trying to strangle her. Soren tells Kludd to come with him and Gylfie, and Grimble asks him what he was waiting for, as it was his chance to go home. Kludd looks at Soren, and then down at Nyra, who was struggling to breathe, looking up at him desperately. He says that he is home, and then screeches at Grimble, distracting him, allowing Nyra to throw him away, injuring his wing in the process. They begin to fight again, and Soren and Gylfie, after some hesitation, have no choice but to jump as the two fighting owls roll toward them. They escape, but Grimble is killed.

After, Nyra is considering whether to allow Kludd to stay. She asks what he can offer them, and he says that his sister, Eglantine, would grow into a strong tyto, and could become a Pure One. Kludd has owlnapped Eglantine to the Beaks, and she is seen trembling with fright behind him.

Much later, during Metal Beak's speech, Kludd and the Pure Ones chant Metal Beak's name, but Eglantine interupts Kludd, saying that she missed Marella and Noctus, and that she was scared. Kludd somewhat comforts her, saying that the Pure Ones appreciate them. But Eglantine angers Kludd when she asks if they can just go and find Soren. She promises that she won't tell anyone what he's doing, and that she just wants to go home. Kludd lies that he'll take her tomorrow, but then he tells her to sleep in the moonlight. Eglantine, not knowing the dangers, falls asleep, and gets moonblinked.

When Eglantine is snapped out of her trance by Soren, she tells him that Kludd was there and that he moonblinked her; he was one them. Soren doesn't want to believe it and says that he was just thankful that Allomere rescued her, but she says that Kludd gave her to Allomere, meaning that he was traitor. Realizing that it's a trap, Soren fetches the band and they go to the Beaks to the Guardians' aid.

Kludd is later seen watching as Allomere is betrayed by Metal Beak and dragged away by bats.

After Soren destroys the fleck trap and he, Digger and Gylfie guard the moon-blinked owlets, he spots Kludd flying in the battle. Shocked, he flies into the battle to find Kludd. Kludd then attacks Soren, throwing him into the forest fire below. Kludd circles Soren, stating his precious guardians are finished, before raking his talons across Soren’s face. He continues on, saying the Pure Ones would triumph and that Tytos would take their rightful place as rulers of the owl kingdoms. Kludd dives towards Soren, attempting to claw him. Soren, who had training, however, manages to shove his wing into Kludd’s chest causing him to lose his control and fall to the ash covered ground. Shocked by his brother’s words, Soren confronts him on it, calling the Pure Ones monsters. Trying to convince his brother, Soren continues to go on, saying that they were moonblinking other owls, causing them to lose all their free will and turning them into slaves. Kludd brushes this off, calling Soren weak and claims he is still living in his dreams. Soren contradicts him, claiming his dreams lead him to guardians. Kludd chuckles and states, “A pity there won’t be any Guardians left after today.” He again attempts to attack Soren only for Soren to jump up, causing Kludd to end up injuring his talons on a jagged tree stump.

Soren is horrified that Kludd would join the Pure Ones after what they did to them, but Kludd replies that the Pure Ones believed in him like no one else ever has and says that Metal Beak says that the strong will triumph, the broken will be put out of their misery and honor is just another word for weakness. Soren tells his brother that he knows he doesn't really think like that to which Kludd replies that Soren doesn't know him at all before attacking him. Kludd, infuriated, then leaps at Soren, sending them tumbling down a burning tree. To stop themselves falling into the fire, Soren grabs a branch, and then Kludd's foot, trying to save him. Kludd, his wing broken, begs Soren to save him, and after a moment's hesitation, Soren struggles to pull Kludd up. But he attacks Soren, and the branch Kludd manages to get a grip on snaps, sending him falling into the fire. Grief-stricken and enraged at Kludd's betrayal and 'death', Soren goes to kill Metal Beak to prevent him from destroying another owl's life.

After Soren defeats Metal Beak, the Pure Ones and Nyra flee the battlefield. Soren and the band are made guardians, and Soren mentions that Kludd's body was never found. However, back in the shattered remains of the Beaks, a shadowy figure staggers in the background; Kludd has survived the forest fire, and is terribly scarred by the fire. He looks at the mask of Metal Beak, now doning the glowing red eyes of the Pure Ones.

Kludd was skeptical about the legends of Ga'Hoole and impatient with his siblings and his parents, though he seemed a bit closer to Eglantine than he is in the books. Kludd was also jealous of the attention his parents gave Soren (much like in the book), and seemed to have a desire to be appreciated and respected, something he found in the Pure Ones. He was granted with the promised power, proved Kludd desired glory and power. Before meeting the Pure Ones he seemed to think Tytos were better than other owls, although this may have been boasting or some sense of pride of being a Barn Owl. His jealousy of Soren turned to hatred, enough for him to desire to kill Soren, which led to his defeat when he tried to trick Soren before another murder attempt. At this point, Kludd had lost all love for his family, even Eglantine, whom he tried to recruit into the Pure Ones but became frustrated when she did not succumb and for mentioning Soren. He intentionally had Eglantine moon-blinked; however, he did give her to Allomere, maybe hinting he wanted her out of harm's way. At times, he showed signs of being enamoured with Nyra, referencing their relationship in the books.

Kludd: "Don't be. You're with me, now. Eglantine, this is our home. They really appreciate us here."

Eglantine: "Kludd, I promise I won't tell anyone what you're doing. I just want to go home."

Eglantine: "So we could go? When?"

- Kludd and Eglantine in the Beaks, Legend of the Guardians: The Owls of Ga'Hoole 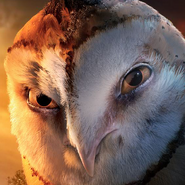 Kludd before he became a Pure One

Kludd's rival going after the blue bird with Kludd just behind

Kludd on the Guardians movie

"What can you offer us?"

Kludd, Soren and Eglantine during their time in Tyto

Kludd, now with glowing red eyes of the Pure Ones

His rival kicked a large stone and almost hit Kludd

Kludd as he appears in the Nintendo DS game 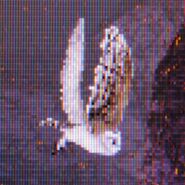 Nintendo DS game
Add a photo to this gallery
Retrieved from "https://guardiansofgahoole.fandom.com/wiki/Kludd_(Movie)?oldid=29425"
Community content is available under CC-BY-SA unless otherwise noted.