“We are perfect,” Gylfie replied. “We are so pleased to be perfect for our masters. Number 25-2 feels quite perfect and complete.”

Soren picked up the cue. “Number 12-1 also feels perfect. We await your commands.”

- Soren and Gylfie pretending to be thoroughly moon blinked, The Capture, page 96

Moon blinking is the process when an owl is forced to sleep beneath the shine of the full moon, which destroys the owl's free will. It is only dangerous when the owl is forced to sleep, while flying or walking under the full shine does not harm the owl at all. If the owl repeats certain information (such as its name) over and over again while doing this, the owl will forget that piece of information. Moon blinking can be resisted by thinking of things that are good and pure such as the legends of Ga'Hoole. Moon scalding is much more powerful, and much harder to resist. Some even say it is impossible, but one way to resist it is by thinking of the legends of Ga'Hoole, whose goodness and purity are enough to block any evil force.

Not long Soren and Gylfie first arrive at St. Aegolius, they and the other owlets are taken to a Glaucidium. There, Jutt and Jatt order the owlets to sleep facing the moon. 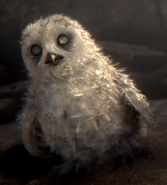 Pete before and after being moon blinked

Eglantine under the influence of moon-blinking

Moonblinked owlets marching on the Japanese cover of The Capture
Community content is available under CC-BY-SA unless otherwise noted.
Advertisement