Guardians of Ga’Hoole Wiki
Register
Don't have an account?
Sign In
Advertisement
in: Unsourced quote, Characters, Owls,
and 9 more

"Now Kludd, just because you can't see something doesn't mean that it isn't real. It's like feeling something through your gizzard, and through our gizzards the voices of the ages whisper to us and tell us what's right."
―Noctus to Kludd on Kludd's disbelief of Guardians, Legend of the Guardians: The Owls of Ga'Hoole

Noctus is a male Barn Owl (Tyto alba) and is the mate of Marella as well as the father of Kludd, Soren, and Eglantine in Legend of the Guardians: The Owls of Ga'Hoole.

Before the events of the movie, in a deleted scene, Noctus tells his children the story of the Battle of the Ice Claws, later flying off to go hunting.

In the beginning, Noctus seen flying through the clouds, and then over Tyto Forest. He catches a mouse, which he takes back to his family. When Kludd complained about the stories about the guardians, Noctus tells him about how stories were part of their culture and their history. Kludd then asks if Noctus had ever seen a guardian. Noctus says that just because you can't see something, that doesn't mean it isn't real. He says that it was like learning something through your gizzard.

The next night, Noctus is teaching Kludd and Soren branching. He tries to convince Kludd to fly quieter, but Kludd doesn't care. He is impressed by Soren's first attempt, and Kludd tries to be better than Soren, but doesn't succeed. When Marella then comes out, saying to Noctus that it is time to hunt, Soren asks if they can come. Noctus says no, but he puts Soren's leaf helmet on him, before dismissing his sons in, where Kludd teases Soren about the leaf helmet. Marella asks if Noctus is worried for Soren, to which he replies that he is worried for both of them, and that he wanted them to be prepared for when they grow up and leave the hollow.

Much later, he is mentioned when his stories about the guardians make Eglantine snap out of her moon-blinking.

At the end, Noctus is seen at the Great Tree, greeting Soren. He is last seen with his wing around Marella, proud of Soren when he, Gylfie, Twilight and Digger become guardians.

"Well young guardian, I don't think your first branching will be that dangerous. Now, don't worry about how much noise you make in the beginning, you just need to stretch those - wings... Well done!"
―Noctus to Soren on his first branching attempt, Legend of the Guardians: The Owls of Ga'Hoole

Marella: "Noctus, I know Soren's a bit of a dreamer... do you worry for him?"

Noctus: "Oh, I worry for both of them. It seems just like yesterday that they were hatchlings, and now they'll soon be grown and leaving the hollow. I just want them to be prepared."

- Noctus and Marella speaking about Soren and Kludd, Legend of the Guardians: The Owls of Ga'Hoole

Noctus is portrayed as a loving father, who enjoys telling his children legends of Ga'Hoole.

Noctus and his family

Noctus talking to Kludd and Soren 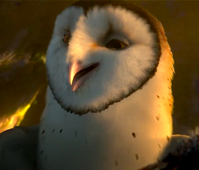