Guardians of Ga’Hoole Wiki
Register
Don't have an account?
Sign In
Advertisement
in: Stubs, Characters, Unsourced quote,
and 26 more

"Evil may cloak itself as good, and good can sometimes appear to be evil. They know each other’s ways."
―Otulissa, To Be a King

Otulissa is a female Spotted Owl, or Strix occidentalis. She is a member of the Chaw of Chaws and is very smart and talented. Because of her seemingly unlimited knowledge, she can be very full of herself and stuck up at times. In Exile she had to have her starboard, or right eye removed, as it had been severely damaged in the battle with the Striga.

Otulissa was born in Ambala. When her parents and aunt went out and didn't come back, she claims she 'fell out of the nest' to see if they were there, but Soren doesn't believe this, and thinks that she was trying to fly before she was ready. At some point, she came to the Great Tree as an owlet.

Otulissa is introduced at the Great Ga'Hoole Tree. At first, Soren and his friends thought she was very snobbish and extremely annoying and loud-mouthed. She was tapped for the colliering and weather interpretation chaws with Soren, Martin and Ruby, much to Soren's horror at first. She really thinks it's an outrage to get tapped for the weather and colliering chaw at first, but then she discovers that Strix Emerilla, who was a renowned weathertrix and distant relative of Otulissa's. She becomes seemingly happy with her chaw choice after that and never complains about being tapped for this chaw again.

After eavesdropping on the Parliament with the band, Otulissa tried to obtain the book Fleckasia and Other Disorders of the Gizzard, which Dewlap had declared spronk. When Dewlap refused, she cursed, "WELL, SPRINK ON YOUR SPRONK!" After that, she, Soren, Gylfie, Twilight, Digger, Martin and Ruby (together known as the Chaw of Chaws) were assigned on a mission to St. Aggie's. But before that, Otulissa was caught by Dewlap reading Fleckasia and Other Disorders of the Gizzard, which Ezylryb had given to her, and given a flint mop. After a while, Otulissa knew that the Chaw of Chaws would be leaving soon, so she threw a dead ground squirrel in Dewlap's face and flew away.

She later caught up with the Chaw of Chaws in reaching St. Aggie's. During the mission, Otulissa suspected a Barn Owl name Uklah to be a slipgizzle for the Pure Ones, and she and Digger tried to strike a conversation. hoping that they'll get information out of her. She later fed false information to Skench about the power of flecks.

During the siege of the Great Ga'Hoole Tree, Otuslissa was part of the Strix Struma Strikers. She saw Strix Struma being struck down by Nyra, mate of Kludd. In turn, she slashed at Nyra's face, giving her a scar for life. After the battle, when Soren revealed that he saw Nyra before in a dream, Otulissa realized that Soren had starsight and told him so. Then she told him that she had now changed.

Otulissa is seen talking with Digger in the library about what was going to happen to Dewlap and what she was guilty of. She was reading Dowsing and Divining Techniques for Metals and Water.

When Trader Mags showed up in the tree, Otulissa expressed her usual disdain over the magpie at first, but Soren and Gylfie spotted her browsing and trading her lucky stones for a stick (dowsing rod) and an owl brain chart.

When the Chaw of Chaws were sent to the Northern Kingdoms, they were divided with different missions. Otulissa and Gylfie were to go to the Glauxian Brothers' retreat and get information from a copy of Fleckasia and Other Disorders of the Gizzard.

She also met a handsome spotted owl named Cleve, a prince from the Tridents, when her and Gylfie were on a meditation flight with the owls of the Glauxian Brothers. Otulissa was shocked to find out that Cleve did not believe in war, that he only liked studying medicines and healing.

Otulissa is first mentioned in her Ga'Hoolology class, teaching about the Fire Cycle. She then went to the library to do research on Beyond the Beyond. Nyroc finally learned her name from a massive fire in Silverveil. The scroom of Strix Struma mentioned her as the owl who would teach him about the Ember of Hoole.

Otulissa was directed by Ezylryb to read the third canto of the Fire Cycle, lines 47-99. The last 11 lines of the Fire Cycle gave a prophecy about the new king of Hoole. Strix Struma's scroom had visited her soon after she read the lines. She said that Otulissa needed to help an owl that needed her, and Otulissa then left for Beyond the Beyond soon after.

Otulissa is first seen making plans to leave for the Beyond the Beyond. After landing on a ridge, she met Gwyndor, who accompanied her in her search for the MacDuncan Clan. She was then seen, or rather, heard by Coryn, who had squeezed into a cleft in a cliff. As soon as she pulled Coryn free, she went yeep for the first time in her life, due to the fact that she thought he was Nyra. Gwyndor intercepted her, and together they perched on a shelf beneath the ridge. She was told by Gwyndor that Coryn had fire sight.

Otulissa was seen next teaching Coryn how to collier, showing him the "Classic Grank Grip," named for Grank himself. After Coryn retrieved three bonk coals, Gwyndor tried to pay her for the coals, but she rejected it, saying that it was vulgar. At the end of the book, she is seen cheering for Coryn's retrieval of the Ember.

Otulissa appeared outside Ezylryb's hollow, waiting along with the rest of the Band for Soren and Coryn to come out and asked them to read the legends as well.

She reads the final legend with the Band and Coryn.

For lying to the "Guardians of the Ember," Otulissa was placed in a "jail" for the majority of the book. When Coryn returned he ordered Bubo to destroy the bars with his strongest hammer and tongs to free Otulissa.

The River of Wind

Otulissa reads the the Knower's (Bess) letter about the Sixth Kingdom. Otulissa goes with the Band and Coryn to Jouzhenkyn (The Middle Kingdom in Jouzhen).

With the help of her student Fritha, she took all of the most important books from the Ga'Hoole Tree to Bess at the Palace of Mists to prevent them from being destroyed by the Striga and the Blue Brigade. During the battle with the Striga, she was wounded and had to have her left eye removed to keep her dying from the infection. She later buys a jaunty bandana to cover the missing eye as she believed there was nothing wrong with being a little vain. Despite her recovery, Otulissa continued to languish, reading and spending time in her garden instead of flying. The loss of her eye had shaken her. Kalo, talking with Otulissa during these times, learns of her past relationship with Cleve and suggests to Coryn that they get him to help her. They split up because Cleve was a gizzard-resister (pacifist) and Otulissa a warrior, but Coryn tries it. Cleve comes to the Great Tree, professing that he still loved Otulissa despite their differences and missed her, and Otulissa decides to accept his love for her.

Otulissa is mentioned when Dumpy the Puffin arrives at Otulissa's hanging garden. During the war, Otulissa commands the Strix Struma Strikers. On the epilogue she writes about the War of the Ember in The Evening Hoot.

This guide book is "written" and narrated by Otulissa, who is the Ga'Hoology ryb. However, during her closing words, she says that "she was guided by an Other named Kathryn Lasky."

As with A Guide Book to the Great Tree, this book is "written" and narrated by Otulissa. She claims that she did months of research and interviews with other owls to gather the stories included. In the Afterword, Otulissa mentions that she and her mate Cleve will be raising four owlets in "less than three moon cycles."

The Den of Forever Frost

The Keepers of the Keys

Otulissa is a very intelligent and bookish owl. She thinks highly of herself and her ancestors, to the point where many think she is utterly snobbish, which she can be at times. She has a high dislike of anything she considers vulgar, immature, or inappropriate, such as Madame Plonk, Bubo, and wet poop jokes. Despite these, she is truly brilliant, coming up with clever battle strategies. After she was made a Guardian, she mastered each field of the Guardian training, and is considered the most intelligent owl of the great tree. She is also known for her rare, but sudden outbursts of anger and swear words of the owl language. Though she can be very snooty, she can also be very kind and caring. She is also very loyal to her friends and would fight to death protecting them.

However, it is shown on occasion that Otulissa does have a playful side. It is shown that she loves to dance at the Milkberry Harvest Festival. She asked Soren to dance with her in The Rescue, and it is mentioned that she danced with Martin in Exile (and almost squashed him on accident). Also, Otulissa seemed to be trying to flirt with Cleve when they first met in The Burning, though she is usually disdainful of owls that are flirtatious.

"I am just so excited about studying higher magnetics, I can't tell you."
―Otulissa, The Siege

Portrait from The Journey 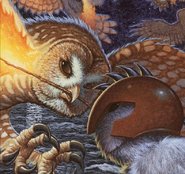 On the cover of The Siege

On the cover of The Golden Tree

On the Chinese cover of The Siege

From the Chinese cover of The Burning 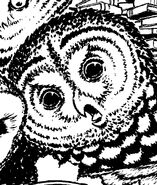 The River of Wind illustration 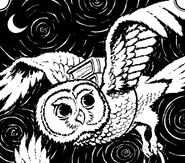 From the Japanese cover of The Burning

From the Japanese cover of The Coming of Hoole

From the Japanese cover of To Be a King 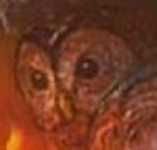 From the Japanese cover of Exile

From the Japanese cover of The River of Wind

From the Polish cover of The Siege 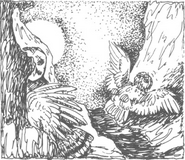