"The battle in the Beaks will truly test us, Shard. I will proudly fight by your side... my friend."
―Parzival to Shard, Legend of the Guardians: The Owls of Ga'Hoole (video game)

Parzival is a young Spotted Owl Guardian and is the secondary protagonist in Legend of the Guardians: The Owls of Ga'Hoole (video game). He often accompanies the main protagonist Shard in his quest to defeat the Pure Ones. He is a rather rude owl, often making snide comments towards Shard.

Much of Parzival's past prior to meeting Shard is largely unknown, but they seem to act like long time rivals. Their interactions and the way Allomere reacts to them suggests they've been bickering for a while.

Legend of the Guardians: The Owls of Ga'Hoole (video game)

Perzival is first seen when he awakes Shard from his nightdream and Ezylryb and Allomere make Shard light torches. After Shard was done, Ezylryb sends Parzival and Shard to chase a flock of crows away from a group of Guardians blockaded by the crows.

After Parzival helps Shard defeat the crows, a group of young owls led by a Barn Owl named Soren arrive at the tree. He tells the Guardians that he was abducted by the Pure Ones, who were moon blinking owlets to mine for flecks, but he escaped. This makes the Tree's monarchs, Boron and Barran, choose to send Allomere and the Search-and-Rescue Guardians to St. Aegolius to the Pure Ones's headquarters. Meanwhile, Ezylryb sends Parzival to accompany Shard as the leader of the two on their quest to uncover the Pure One's intentions, beginning with rescuing an eagle in the Desert of Kuneer named Streak. He had been captured by bats, so upon arrival Parzival and Shard kill them and free Streak. 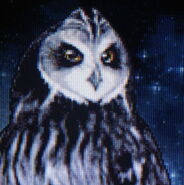 Parzival in the DS game 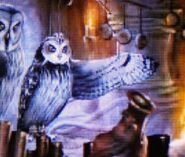 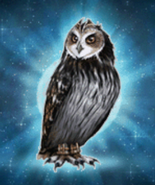 Parzival's full wingman portrait
Add a photo to this gallery
Retrieved from "https://guardiansofgahoole.fandom.com/wiki/Parzival?oldid=29823"
Community content is available under CC-BY-SA unless otherwise noted.