"Mother. Father. Maybe now the lies about Perrock can end."
―Shard after killing Allomere, Legend of the Guardians: The Owls of Ga'Hoole (video game)

Shard is a playable character and the main protagonist in Legend of the Guardians:Owls of Ga'Hoole (video game). Players can decide what species of owl Shard will be: a Barn Owl (balanced stats), Spotted Owl (fast but a weaker fighter, relies mostly on wingmen), Great Horned Owl (strong fighting type), and Great Gray Owl (stamina quick-kill type).

Shard, when a Barn Owl, has a bright white face and brown feathers with yellow eyes. In the DS version of the game, he has a brown diamond-shaped pattern on his chest. As a Spotted Owl, he has a light brown facial disk, dark brown feathers with white spots, and large brown eyes. His Great Horned form has a brown facial disk and feathers with grey and tan streaks. He has yellow eyes, a black beak, and two large ear tufts. Lastly, his Great Gray form has gray feathers and a large facial disk, with small yellow eyes and white tufts of feathers around his yellow beak. Regardless of species, Shard has a friendly appearance.

In cutscenes for the console game, Shard has an ambiguous species with black stripes across his body.

Shard is born to his father Grettir and mother Lygeia in their hollow. A few nights later, the evil Pure Ones attack and murder Grettir and Lygeia, but before Shard could be executed, the Guardians arrive and rescue him, taking him back to the Great Ga'Hoole Tree where he will be raised.

Many years later, Shard, now a young guardian, is "nightdreaming" about repelling an invasion of the Great Tree with the guardian Allomere, when his fellow guardian Parzival knocks him back to his senses. Shard is shown to be irritated with Parzival, and by the way they speak to one another, it can be assumed that they bicker often. The two fight until Ezylryb arrives, giving them flint mops to light torches. After finishing, they are made aware of a group of guardian scouts with rescued owlets being pursued by a flock of crows. Ezylryb sends Shard and Parzival to deal with the crows. The rescued owlets, led by a Barn Owl named Soren, are brought to the tree and Soren informs the guardians that he was abducted by the Pure Ones but escaped and the Pure Ones are also moon blinking owlets and forcing them to mine for flecks, which made the Tree's monarchs Boron and Barran send Allomere and the search-and-rescue guardians to the Pure One's headquarters in St. Aegolius.

Later, Ezylryb calls Shard and Parzival to a meeting, explaining the situation to them. The rescued owlets had told of the Pure Ones in St. Aegolius, and the Parliament decided to send Allomere to investigate. Ezylryb, distrusting Allomere, sends Shard and Parzival to investigate word of Pure Ones in the desert of Kuneer and search for an eagle named Streak who had been captured by bats. After Shard and Parzival arrived in the desert of Kuneer, they found Streak and fought off a large group of bats and freed the eagle. Streak, who became Shard's new wingman, thanked them and decided to help the guardians take down the bats. Shard, Parzival, and Streak began destroying many bat sanctuaries in the desert. That night, Shard attacked bats attempting to smuggle owlets and bring them to the Pure Ones and rescued the owlets and returned them to Streak's nest. Afterwards, Shard, Parzival, and Streak attacked and destroyed the bats' hideout, but were attacked by the Bat Chieftain. After Shard defeated the Chieftain using hot coals, they discovered an owl named Uriah, who also became Shard's new wingman, and brought him to the Great Ga'Hoole Tree, where Ezylryb gave Shard and Parzival instructions to help the resistance against the Pure Ones stationed in Tyto, Soren's home.

Later, Ezylryb sent Shard and Parzival and their band to the Glauxian Brothers Retreat to destroy the Pure Ones's primary source of flecks. Parzival challenged Shard to a race to the monastery, and Streak and Uriah joined in, too. In the monastery they helped the brotherhood save monks from the hagsfiends, hideous crossbreeds of owls and crows. After they defeated the hagsfiends, they found an injured hermit named Cormac who helped them rescue monks from the Pure Ones and the hagsfiends. Afterwards, they traveled to a canyon where a large supply of flecks was stored. After disposing of the fleck pillars, the Hagsfiend Queen emerged from the fog and attacked. Shard defeated the Queen and returned with Cormac to the monastery, where he gave Shard his father Grettir's battle claws as a gift of thanks, while also revealing that an owl betrayed Grettir and let the hagsfiends into the monastery.

After returning to the Great Ga'Hoole Tree, Allomere returned with two owlets, one of them being Soren's younger sister, Eglantine. Now with proof that the Pure Ones had indeed returned, Boron, Barran, Ezylryb, and the other guardians flew off to St. Aegolius to confront the Pure Ones. Shard and Parzival followed Soren and his group to a dangerous area located nearby St. Aegolius called the Beaks. Upon arrival, Parzival was attacked by bats in possession of flecks. Shard quickly rescued his friend and he and Parzival continued to battle the Pure Ones and destroyed their defenses, allowing the Guardians to make their way to the fortress, but the Pure Ones spun a trap on the Guardians, and used a giant group of flecks to stun the Guardians, causing them to plummet to the ground. However, Soren dove into the fleck field with hot coals and destroyed the flecks, freeing the Guardians.

Later, Shard came across Allomere who revealed that he and Grettir were well known partners at Perrock, indicating that it was he who let the hagsfiends attack the monastery, and gave them the flecks. Shard was also shocked to find out that Allomere also murdered his parents at birth. Allomere laughed maniacally and told Shard that he would be silenced just as his father was. Just before Allomere attacked Shard, a bat appeared out of nowhere and struck Allomere, taking him with it. Shard tried to pursue, but was stopped by Ezylryb, who informed him of a giant fleck signal tower nearby. After taking out the signal tower's defenses, Shard and Parzival destroyed the giant fleck pillar on the tower, destroying the Pure Ones's signal tower. Shard, Ezylryb, and Parzival quickly got to the entrance to the Pure Ones's stronghold and Ezylryb realized that if they destroyed the forge, the Pure Ones would be completely unarmed.

Ezylryb sent Shard into the lower levels of the stronghold to find the Pure One forge while Parzival remained outside to assist the other guardians against the Pure Ones. Meanwhile, Ezylryb flew to the upper levels of the stronghold to confront Metal Beak, the leader of the Pure Ones. Shard flew through the caverns and fought many Pure Ones along the way. After he finally found the forge, Shard used hot coals to destroy the furnaces. After their destruction, the foundation of the forge began to collapse. Shard attempted to escape, but was pushed backwards by Allomere, who vowed Shard will not escape the fortress alive as he flew off to make another clean escape. Shard pursued the traitorous guardian through the caverns and finally caught up to Allomere near the exit from the caverns, and the two owls fought fiercely. After a long and tough battle, Shard finally defeated Allomere and sent the traitor plunging into the pool below. Shard then proceeded to exit the caverns, but Allomere quickly emerged from the pool and got his claws around Shard's neck, strangling him. He told Shard that the Pure Ones will win as Shard slowly choked to death. However, Shard used the last of his air and grabbed onto Allomere's wing, throwing him and sending the traitor slamming into the rock walls, causing a small section of the ceiling to collapse. Allomere attempted to attack Shard again, but was crushed to death by the rocks.

Shard left the caverns to find Ezylryb and informed him of his success and Allomere's demise, and told Ezylryb that it didn't give him peace and questioned the thought of such a thing being worth fighting for, but Ezylryb quickly ensured Shard that it was worth fighting for. Then, changing the subject, Ezylryb told Shard that the owlets of St. Aegolius were still awaiting them, so then Shard flew off to St. Aegolius with Ezylryb to free the remaining owlets, and eventually returned to the Great Ga'Hoole Tree with the rest of the rescued owlets where Shard and Parzival were reunited.</p> 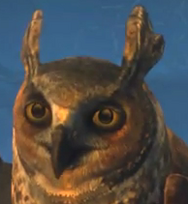 Shard as a Great Horned Owl 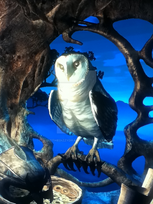 Shard as a Barn Owl

Shard while still an egg

Shard being rescued by the Guardians

Shard speaking with Ezylryb at the end of the game

Shard (foreground, facing away) meeting with the Glauxian Brothers
Add a photo to this gallery 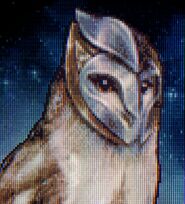 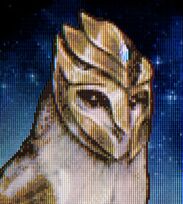 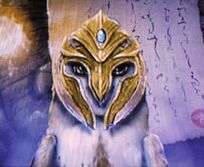 Shard in the DS game 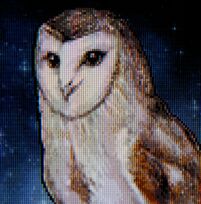 Portrait without armour
Add a photo to this gallery
﻿
Retrieved from "https://guardiansofgahoole.fandom.com/wiki/Shard?oldid=29215"
Community content is available under CC-BY-SA unless otherwise noted.