“Soren’s story is perhaps the hero’s journey in its purest form. It is a timeless, universal narrative of bravery, growth, and sacrifice, and one that can stand alongside any of those of the heroes of legend.”
- Zack Snyder, director of Legend of the Guardians: The Owls of Ga’Hoole

Soren is an adolescent Barn Owl, son of Noctus and Marella, and brother of Kludd and Eglantine. Unlike Kludd, Soren is a dreamer, and loves the legends of Ga'hoole. He's the main protagonist of the movie, and voiced by Jim Sturgess.

Soren has yellow-beige feathers and a round facial disc. Unlike wild Barn Owls and his character in the books, Soren has yellow eyes that can move, which was most likely changed to make him look more visually pleasing and help to display more human-like facial expressions.

"The hero tends to be the hardest character to design and Soren was no different. Being a Barn owl made it more difficult because their features are striking and ghostly; they are beautiful yet out of all the owls they're the hardest to empathise with. We went through a process of trying to loosen up our character sketches, discarding the need to be realistic so we could try and find a look that was immediately pleasing. The final design ended up combining these sketch explorations with a particular barn owl photograph that Zack felt best resembled Soren." - Simon Whiteley, The Art of Legend of the Guardians: The Owls of Ga'hoole

Soren is first seen when his father, Noctus, flies into the family hollow with a mouse. He and Eglantine are acting out the legend of Lyze of Kiel, with Soren playing Lyze and Eglantine reluctantly playing Metal Beak. Soren's older brother, Kludd, looks down on their enthusiasm in the legends.

"No, my dreams are what make me strong, Kludd. They led me to the Guardians."

- Soren, Legend of the Guardians: The Owls of Ga'hoole

Soren with Kludd and Eglantine

Flying in the storm

After flying through a forest fire.

At the Great Ga'Hoole Tree

Soren about to fly into the fire

|The energy from the flecks attaching to Soren's gizzard

Soren in the monsoon

Soren with Digger while sleeping

Soren in love with Otulissa

About to dive into the fleck trap

Soren during his battle with Kludd

About to escape from St. Aegelious with Gylfie

Soren with the Band on a German Wallpaper 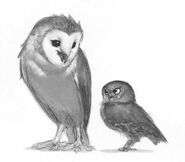 Concept art of Soren (left) where his eyes are black

Soren's drawings of the Great Tree, Lyze of Kiel and Metal Beak on his hollow's wall

Soren and his family

Soren Ty plush
Add a photo to this gallery

Soren in the video game

Soren's in-game model while carrying the coal bucket, having glowing accents on his feathers for unexplained reasons. This is most likely a bug that is very common

Soren's in-game model without glowing accents, showing he has blue accents on his wings, tail, and face feathers.
Add a photo to this gallery
Retrieved from "https://guardiansofgahoole.fandom.com/wiki/Soren_(Movie)?oldid=28931"
Community content is available under CC-BY-SA unless otherwise noted.