The Southern Kingdoms (also known as the S'yrthghar) are the southern lands of the owl world. They contain four of the six owl kingdoms and they are also where the majority of the Guardians of Ga'Hoole series takes place.

The owl world used to be inhabited by strange creatures known as the Others, that were known to walk in two sticks, upright, without any feathers, or fur. For some reason, the Others became extinct but many of their creations, like buildings, artifacts, and trinkets remained scattered throughout the owl kingdoms such as the Palace of Mists.

The owl Kingdoms in the Southern Kingdoms are known as:

-The Forest Kingdom of Tyto

-The Forest Kingdom of Ambala

-The Island of Hoole 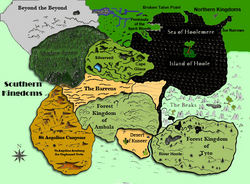 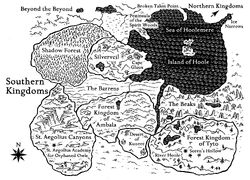