Guardians of Ga’Hoole Wiki
Register
Don't have an account?
Sign In
Advertisement
in: Books, The Capture, Guardians of Ga'hoole Books

The Capture is the first book of the Guardians of Ga'Hoole series.

Soren is born in the forest of Tyto, a tranquil kingdom where the Barn Owls dwell. But evil lurks in the owl world, evil that threatens to shatter Tyto's peace and change the course of Soren's life forever. Soren is captured and taken to a dark and forbidding canyon. It's called an orphanage, but Soren believes it's something far worse. He and his friend Gylfie know that the only way out is up. To escape, they will need to do something they have never done before—fly. With the help of a newfound friend, they are taught how to fly and finally escape the winding tunnels of the canyons. And so begins a magical journey. Along the way, Soren and Gylfie meet Twilight and Digger. The four owls band together to seek the truth and protect the owl world from unimaginable danger.

Soren is plummeting towards the ground. He tries to attempt to save himself by beating his underdeveloped wings, but fails. Suddenly he starts recalling every memory from his short life:

Soren, a Barn Owl, is born in the forest kingdom of Tyto two weeks prior to the start of the novel as the middle child of Noctus and Marella, and younger brother of Kludd and older brother of Eglantine. He and his siblings are cared for by a blind nestmaid snake named Mrs. Plithiver. Kludd is shown to be a difficult owlet who seems to have resented Soren from the moment he hatched. Soren's bond with Eglantine is very strong. Kludd refuses to help Soren and threatens Mrs. Plithiver. Soren is then snatched by an owl patrol from St. Aegolius Academy for Orphaned Owls (St. Aggie's for short). During the flight to the "academy", Soren meets another kidnapped owlet: a young Elf Owl named Gylfie. She lived in the desert of Kuneer. She had tried to fly, but had fallen out of her nest. They talk about flying and the differences between the owlets.

When they're brought in, Skench explains to all of the owlets (including Soren and Gylfie) that they are now orphans, and have been rescued. Every owlet is given a number. Soon, the adult owls at St. Aegolius Academy introduce themselves to the owlets.

After their initiation into St. Aggie's, the two owlets meet once again in the glaucidium, where all owlets are to participate in the sleep march. Gylfie and Soren deduce that the owls of St. Aggie's are moon-blinking owlets by having them march under the full moon and repeat their own names. Therefore, any moon-blinked owl will lose all sense of individuality and become the perfect slave for St. Aggie's. To counter this tactic, Gylfie and Soren pretend to march but stay in the shadows of the glaucidium.

As time passes, Soren realizes that he hadn't slipped from his nest, rather Kludd had pushed him out instead. Soren and Gylfie are then assigned to the pelletorium to pick out fleck or other items out of pellets. After asking what flecks are, Soren is subjected to laughter therapy and has his feathers plucked out. During Soren's laughter therapy, Gylfie discovers the library of St. Aggie's is in fact a storage room for all the flecks and other items. Most importantly, it's close to the sky: A perfect place to escape. She also suspects that Grimble isn't moon-blinked.

Soren and Gylfie plan on asking Grimble to teach them how to fly and, in the meantime, learn all they can about St Aggie's, so that when they escape they can warn the other owls. Despite the two owlets best efforts, they are caught hiding from the moon and are subjected to moon scalding: An even more powerful tactic than moon-blinking. However, Soren recited the legends of Ga'Hoole to protect them both while giving Skench, the Ablah General of St. Aggie's, and Spoorn, her first lieutenant the impression that they're perfectly moon blinked. This ensured them a place together in the glaucidiums and more special assignments such as jobs in the eggorium and hatchery, a place where owl eggs are kept. Gylfie soon discovers that Hortense, another owlet also known as 12-8, isn't moon-blinked either but is an infiltrator inside the hatchery. She rescues owl eggs and gives them to a pair of eagles. Despite her courageous actions, she is caught smuggling out eggs and is pushed down a cliff to her death by Finny, Soren's twisted pit guardian. Though the grief of Hortense's death hangs over the two owls, the pressure to escape is escalated when vampire bats arrive to suck the blood of St. Aggie's owls, draining them of nutrients and making their feathers wither, rendering them unable to fly. Grimble comes back and he recounts his story of being recruited by St. Aggie's as a skilled fighter when he killed Ork, a former contender for leadership in St. Aggie's, when he had tried to kidnap his daughter, Bess. Grimble had resisted moon blinking like Soren and Gylfie, but had lost his strength and his family eventually didn't recognize him before they vanished all together.

He also reveals that St. Aggie's only aim is absolute control of every owl kingdom in the world. With that thought, Soren and Gylfie persuade Grimble to teach them how to fly. Eventually, Soren and Gylfie stage their escape from the library, but are found by Skench in full battle regalia. However, she is slammed against the library wall by an unknown force which allow the two owls to escape. Unfortunately, Grimble is killed by Skench during their escape. As they stop in a tree for the night, they meet Twilight, a lone Great Gray Owl who was orphaned as an owlet but raised by the ideals of the "Orphan School of Tough Learning". They decide to look for the Great Ga'Hoole Tree and the Guardians of Ga'Hoole together to inform them about the treachery of St. Aggie's. Before doing so, Soren and Gylfie decide to see if their parents are still alive and well. They fly to Tyto and Soren's fir tree home, but none of Soren's family are there.

On the upside, Mrs. Plithiver, Soren's family's nest-maid snake, there. She confirms Kludd's true nature and suspects that he pushed Eglantine out of the nest as well, after having driven her away. As they enter the Desert of Kuneer, they meet a Burrowing Owl named Digger, who tell them that Jatt and Jutt, two cousins who serve St. Aggie's, had snatched his older brother, Cunny, before eating his younger brother, Flick. Digger accompanies the three owls in search of his old home from which he ran after the attack. While they are travelling, a St. Aggie's patrol consisting of Jatt, Jutt, and a Western Screech Owl by the number of 47-2 arrive. The four owls procede to defeat the patrol, with the assistance of Hortense's eagles, Streak and Zan. Digger gives up his search after the eagles tell him of his parents' deaths. From that moment on, all four owls swear a silent oath to be a band forevermore and fly off into the night, to continue their quest to find the Guardians of Ga'Hoole. 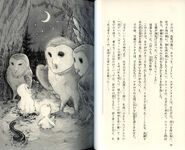 Illustration from the Japanese books

The movie version of the book

Another image of the alternate cover

Another Japanese Cover - Escape From The Evil Fortress