Nachtmagen rages through the N'yrthghar as hagfiends and the traitorous lords conspire to defeat the new king. With Grank and Theo at his side, Hoole must forge an army of free owls strong enough to defeat the forces of darkness massing on the horizon. The power of the one Ember fires the young king's very gizzard and he grows great. But for young Hoole there is a danger much closer than treacherous lords and the poison of half-hags. For magic - even good magic - brings great peril to those who wield it.
So Soren, Coryn, and the Band read the final legend and glimpse what the future may demand of the Guardians of Ga'Hoole.

Add a photo to this gallery

In this final book of the Legends trilogy Hoole reclaims the throne of his father and goes on to wage a war against the forces of chaos, greed and oppression led by the powerful warlord-tyrants. Grank, the first collier, uses his skills with fire and metals to forge weapons for battle. With great trepidation Hoole uses the power of the Ember in the final, decisive battle and wins. At the dawn of a new era of peace, Hoole searches for the ideal place to establish not a kingdom but an order of free owls and finds the Great Tree.

Is Unknown who wrote this legend. However, the only one who was close to Hoole (and thus is the potential author) remaining is Phineas. 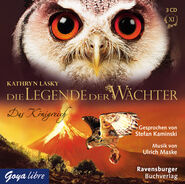 Alternate Chinese cover
Add a photo to this gallery
Retrieved from "https://guardiansofgahoole.fandom.com/wiki/To_Be_a_King?oldid=29445"
Community content is available under CC-BY-SA unless otherwise noted.