"He makes the best friend and the worst enemy."

Twilight is a male Great Gray Owl, or Strix nebulosa. He is a free flier, orphaned within hours of hatching, a Guardian at the Great Ga'Hoole Tree, and a member of the Band and the Chaw of Chaws. He is known for his boasting, battle chants and fighting skills. He eventually finds his two brothers, Tavis and Cletus. As also noted in Guardians of Ga'Hoole: A Guidebook, it was revealed that his true name is Cassius.

A family of Great Gray Owls, Skye and her two sons, Tavis and Cletus, lived in Ambala where they were expecting a new egg to hatch, whom Skye named Cassius. When Cassius emerged, he was mysteriously lost, along with his mother. It turned out that a St. Aggie's patrol attempted to abduct him, but Twilight ferociously fought back and bit off the snatcher's talon. He was then dropped into an abandoned nest. Skye's fate is unknown.

The hatchling had to quickly learn to fend for himself in what he called the "Orphan School of Tough Learning." He would eventually come to name himself "Twilight," as he was too young to learn his original name. Twilight found himself living with many different owls, and even some other animals such as foxes, leading him to refuse to ever eat a fox. In Kuneer, he had lived with a family of Elf Owls in a cactus for a short amount of time.

Twilight was found by Soren and Gylfie living in a tree while they were escaping from St. Aggie's. He helped Gylfie flip herself right-side up when she was dangling from a branch while she tried to land. He told them of his search for the Great Ga'Hoole Tree, which was in the Sea of Hoolemere. He asked the owls if they wanted to come with him, and they said yes. Soren and Gylfie wanted to see their parents, so he flew them back to their homes. Neither found their parents, but Soren found his blind nest-maid snake, Mrs. Plithiver.

While they were searching for Gylfie's parents, they met a Burrowing Owl named Digger, and were attacked by a St. Aggie's patrol of Jatt, Jutt, and 47-2. Twilight and his friends fought hard, and killed all three St. Aggie's owls. In the end, Digger decided to go with Twilight on the search for the Great Ga'Hoole Tree. Twilight's war cries were very powerful, and he used them to take care of the St. Aggie's patrol. After that, the band met Hortense's eagles and they all continued their journey to the Great Ga'Hoole Tree.

While on the band's journey to the Great Ga'Hoole Tree, they were entranced by the Mirror Lakes in the Beaks. Twilight was particularly affected, singing praises about himself. When at the Great Tree, he was quickly tapped for the Search-and-Rescue chaw, much to his delight.

Twilight, along with the rest of the Chaw of Chaws, helped destroy the Devil's Triangle and save Ezylryb from the Pure Ones.

Twilight, with the Chaws of Chaws, went to St. Aggie's on a mission to see if the Pure Ones had infiltrated it, which they had.

During the final battle against the Pure Ones, Twilight he had been ordered by Ezylryb to group the vultures around the battlefield. Many hireclaws, very superstitious, went yeep at the sight. It was also him who killed Kludd by bursting into his cave during the burning, cutting his spine in half with an ice scimitar.

Not long after this battle, he saw the scroom of his unknown mother, and discovered that his real name was Cassius and that his mother was a famous poet who wrote an ode to him, the first verse being, "He came at twilight."

Twilight appeared in the prologue on a branch of the Tree with Gylfie and Digger. They were waiting while Soren and Coryn were in Ezylryb's hollow as he was dying.

Twilight is always talking about his "orphan school of tough learning", because he had to learn how to fly, hunt, and survive all by himself. He is gruff, streetsmart, and very violent though not cruel or evil; he completely enjoys the thought of going to war or just fighting in general. He also has an embarrassing habit of singing songs of how powerful he is and what he'll do to his enemies, which is occasionally helpful to the other owls as a courage booster or making enemies go yeep. Sometimes he seems to have a softer side to him, but it's rarely displayed.

Twilight is rather childlike, and it's noted that he is always taking part in a young owl holiday in Ga'Hoole known as Punkie Night and never misses it. On the official Legends of The Guardians website, Twilight's profile states that he has a desire to fit in with the other owls, possibly suggesting that he might be somewhat insecure concerning his size or his general upbringing.

Twilight has two brothers, Tavis and Cletus and his mother, Skye, was a famous poet. One day Tavis and Cletus went hunting for their mother, who was sitting on a egg which was hour or a minute away from hatching. She disappeared when the two came back, and saw that the egg was already hatched. They found their mother's body, but not their little brother's. It is said that their father was killed by the old High Tyto before Kludd. It is never said how their mother died, possibly by a St. Aggie's patrol or the Pure Ones. After Tavis and Cletus lost their mother and little brother, they lived underground in the desert of Kuneer. In The War of the Ember, Twilight discovered his brothers, and the three of them enjoyed a happy reunion.

"Here, there, everywhere. You name it, I've been there." 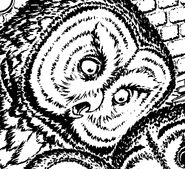 Twilight in The River of Wind

Retrieved from "https://guardiansofgahoole.fandom.com/wiki/Twilight_(Books)?oldid=29160"
Community content is available under CC-BY-SA unless otherwise noted.